During first term a group of 9 students from Eastern Goldfields College were selected to sail on ‘Voyage 20-08’ on the STS Leeuwin II a Leeuwin Ocean Adventure voyage thanks to the generosity of AngloGold Ashanti.

Our students were challenged by ‘Mother Nature’ and their vessel was hit with some absolutely appalling sea conditions. Their original voyage from Albany to Fremantle was turned around. Unfortunately, the winds were much stronger than expected over the first couple of days and they were making no headway towards Cape Leeuwin. The Captain made the decision to return to Albany and spend a day at anchor, doing all the training rotations, working together and building confidence in the rigging.

The impact of COVID-19 on Leeuwin Ocean Adventure was swift and on 23 March, the decision was made that Voyage 20-08 would be the last for the 2019-20 season. In order to protect the health, safety and wellbeing of all on-board including trainees, volunteers, members of the public and crew, all voyages, day sails, chartered sails and alongside events until September 2020 have been cancelled.

EGC Student Coordinator Miss Hannah Garrett said, ‘Students had a great time and really loved the opportunity and experience. The Leeuwin Ocean Adventure is such a great opportunity for students to be challenged and discover their strengths while working on their self-confidence and leadership skills.’ 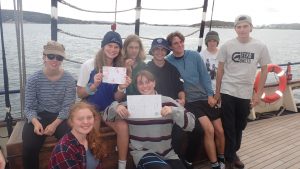 Group with with Hali Epis and Ambrodie Cooper 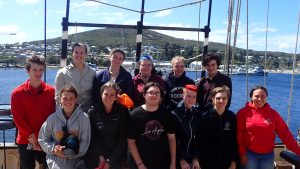 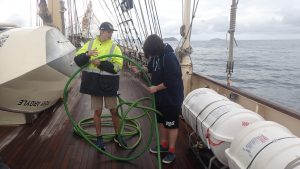 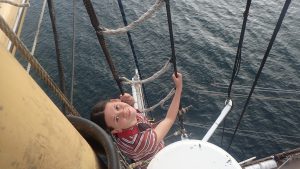 Welcome to Eastern Goldfields College – a Western Australian senior college located in the capital of the Goldfields. We encourage our students to achieve to their potential following their chosen pathways for either post school education or employment.

The Eastern Goldfields name has long been associated with secondary education in Kalgoorlie-Boulder and surrounds and brings with it a great deal of tradition. In 2014 we celebrated the centenary of Eastern Goldfields. While we draw on the lessons of the past, we look forward to future challenges and achievements.

Happy holidays to all Eastern Goldfields College students, teachers and staff. We hope you have a wonderful break and we look forward to welcoming all of our students back on Tuesday 21 July, 2020.
Be safe and take care of one another. ... See MoreSee Less

Share on FacebookShare on TwitterShare on Linked InShare by Email

Centrecare team leaders Sarah and Richard spoke to the Certificate II Community Services class at Eastern Goldfields College on Friday with regards to providing appropriate client service, screening and the importance of client support within the Community Services sector.
The extensive range of Centrecare programs were explained to the students as well as the organisation’s policies for privacy, referrals, support plans and interagency networks.
VET Coordinator Mrs Seghini said, 'Students gained an incredible insight into the importance of providing a positive first point of contact experience.' ... See MoreSee Less

Share on FacebookShare on TwitterShare on Linked InShare by Email